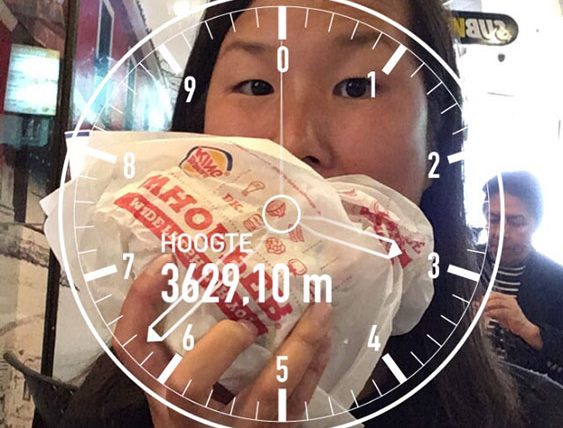 Last night I took the night bus to La Paz, the highest capital in the world at 3660 meters!

It was a good ride, besides the fact that the toilet didn't work (it was closed because they are too lazy to clean it apparently). So when we almost arrived at the bus terminal my blather almost exploded! Lucky for me the toilet was right in front of where the bus stopped! So I asked Mark if he could watch my bags. Sweet!!! It was such a relief, because I really thought I was going to pee my pants haha

So I checked into my hostel (Adventure Brew) and when I was waiting there to be able to put my stuff in the room, I heard really familiar voices... It were Blake, Jordan and Chris AGAIN!

When I was settled in my room I booked a tour for the same day to visit the Titikaka ruins. But never got picked up. So I emailed them and because of last minute booking it was not possible. So I booked it for the day after the Death Road.

Then I went to another hostel Loki to meet up with Dutch Lisa and to book my tour for tomorrow! We hang out with a friend of hers and Mark. Her friend was looking for a good tattoo shop and when we found one, I almost took a tattoo there. My whale tattoo. But because I was going to do the Death Road tomorrow, they advised me not to do it. They didn't even wanted to do it anymore haha.  Then we went for lunch in the highest Burger King of the world. But in the process of getting there, we lost Mark on the way. But met up with him there again! He bought a chess game, but coming from New Zealand and that accent... he pronounced chess the exact same way as cheese. Lisa asked him how he would say the yellow thing on her hamburger and then he said cheese. And then she asked him what he had just bought... and again cheese whahaha

La Paz had a weird atmosphere at the time we were there. There were riots and demonstrations going on. Parts of the city were closed and some parts people were camping there under big tarps.
At night when I talked to Chris he told me he got up close with one of the demonstrations and got teary eyes of the pepper spray!

Hope it will get better, because it is a pretty awesome and big city! But not with this stuff going on :(

Tomorrow I'm going to bike the Death Road! Really excited about that, but also a little bit scared... just taking it easy.