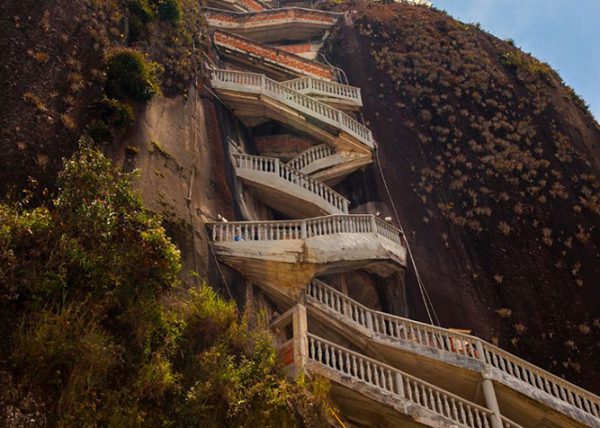 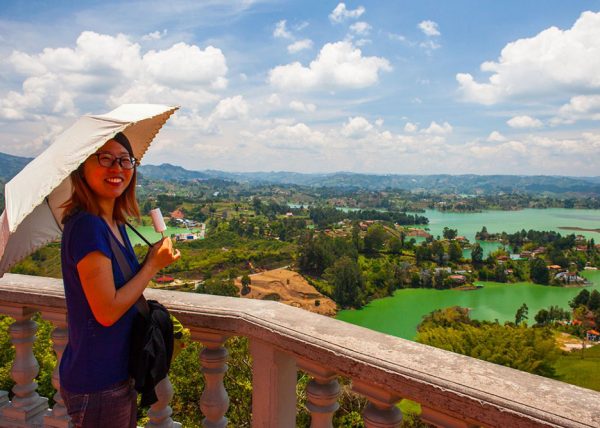 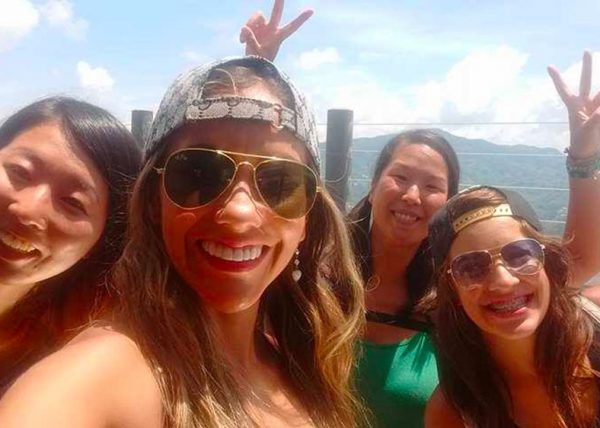 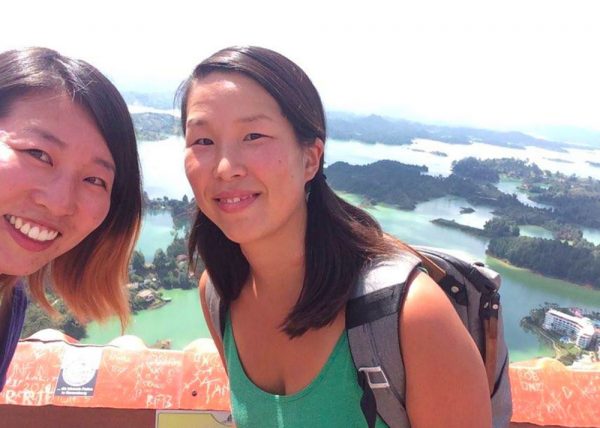 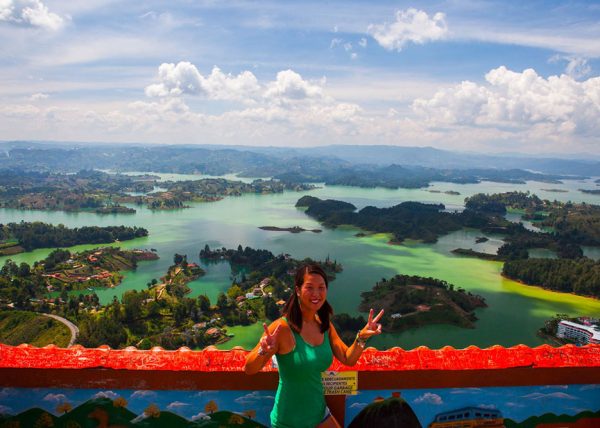 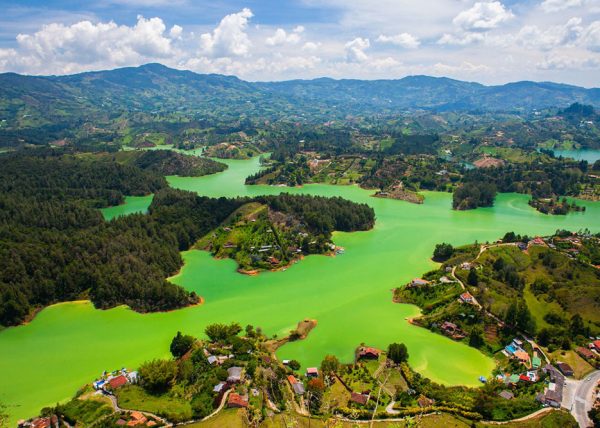 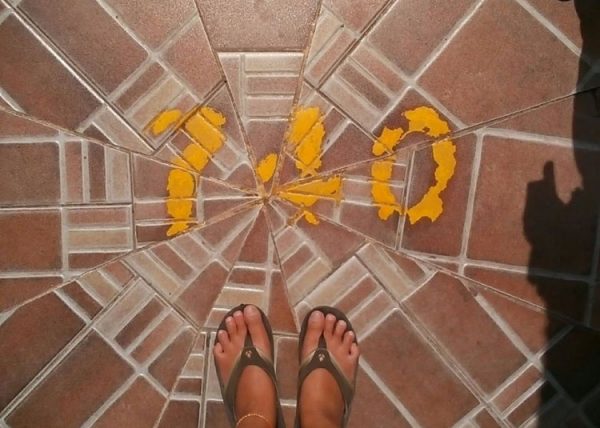 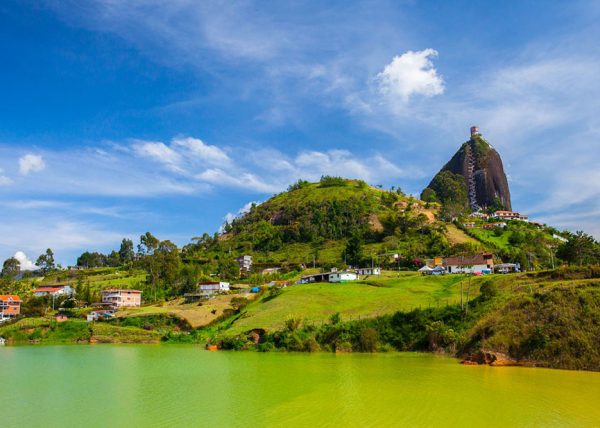 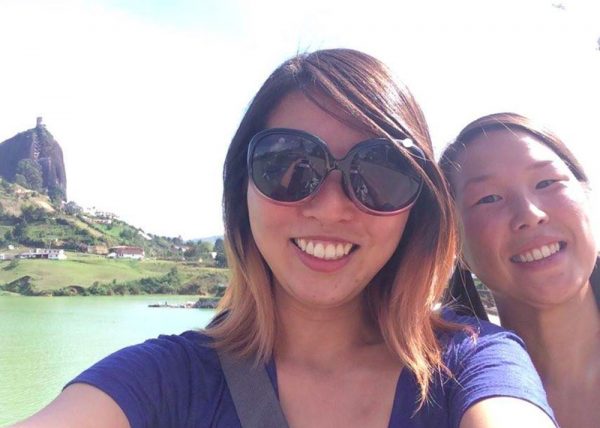 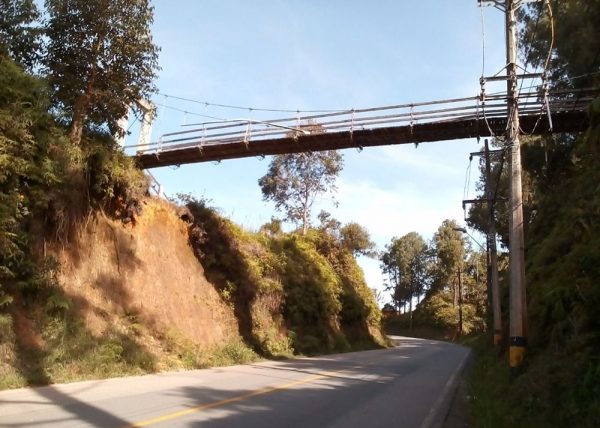 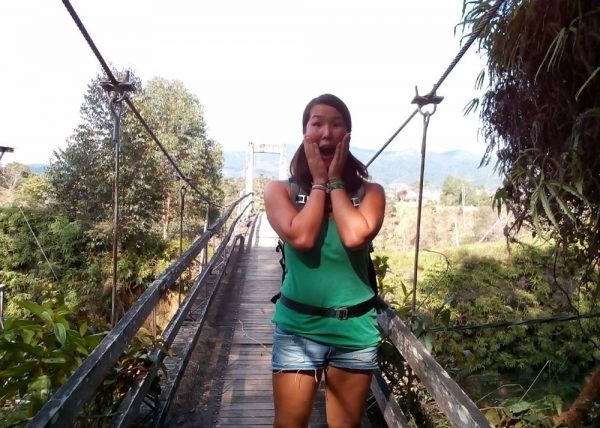 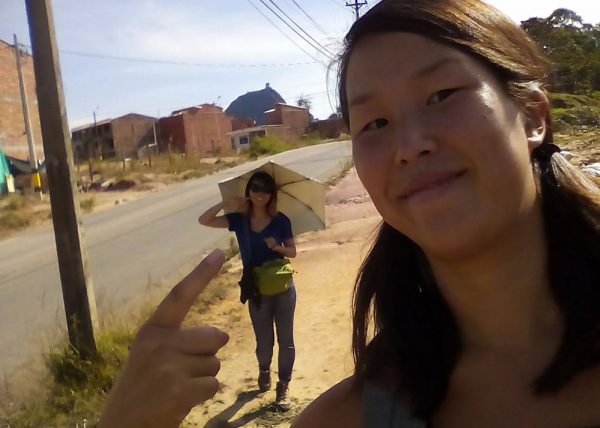 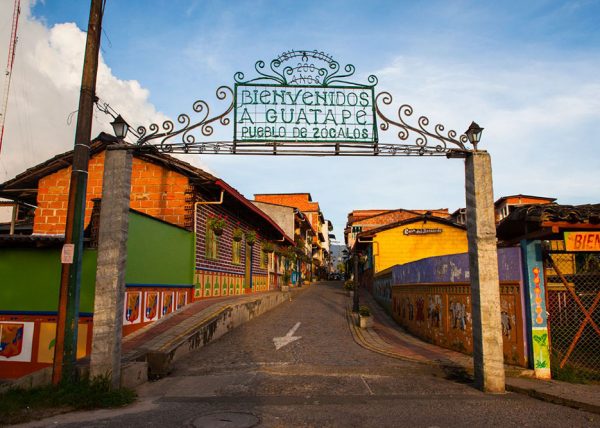 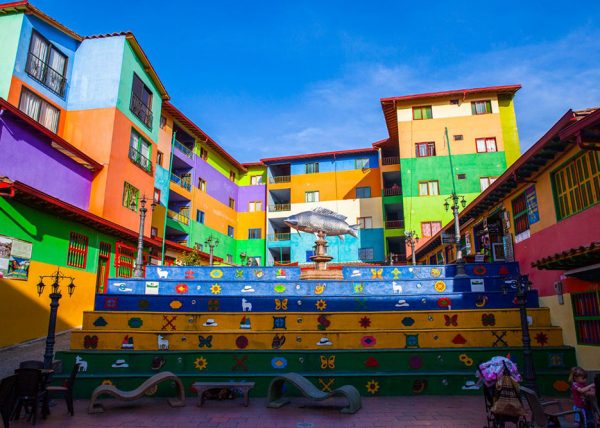 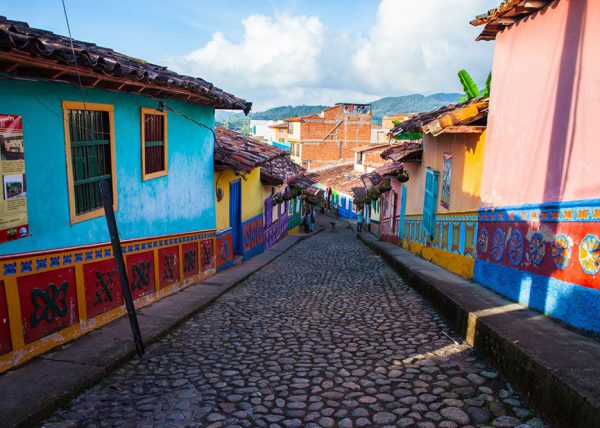 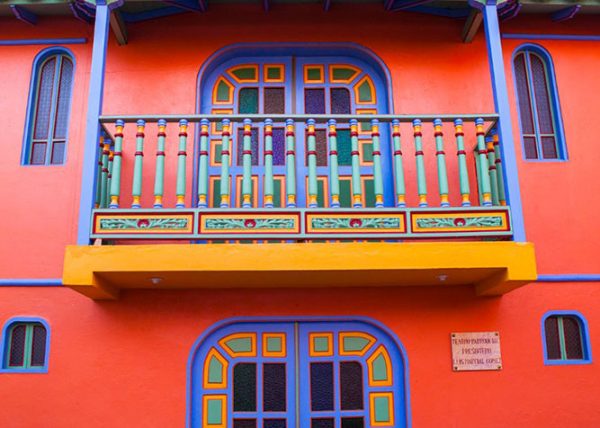 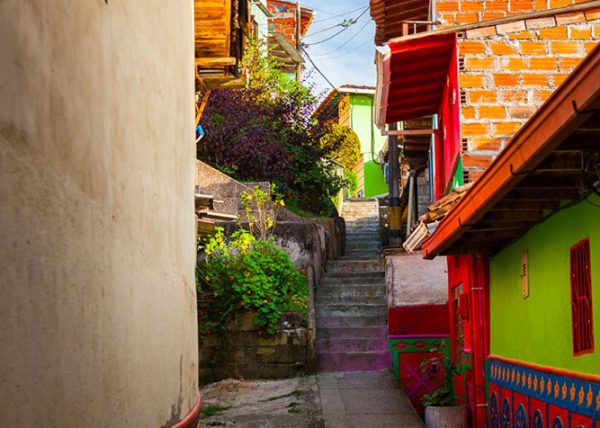 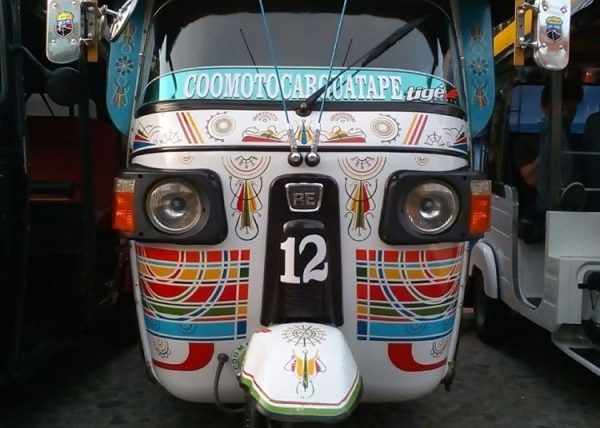 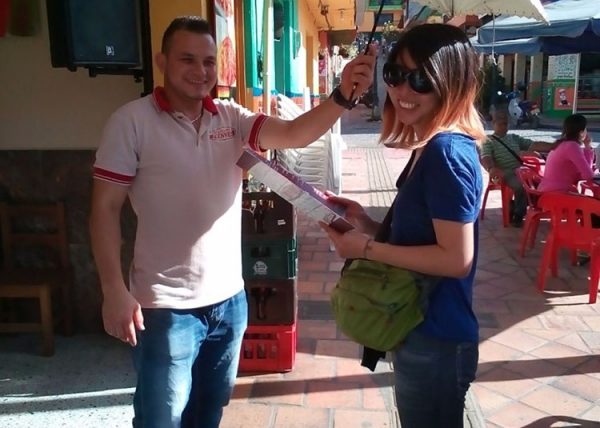 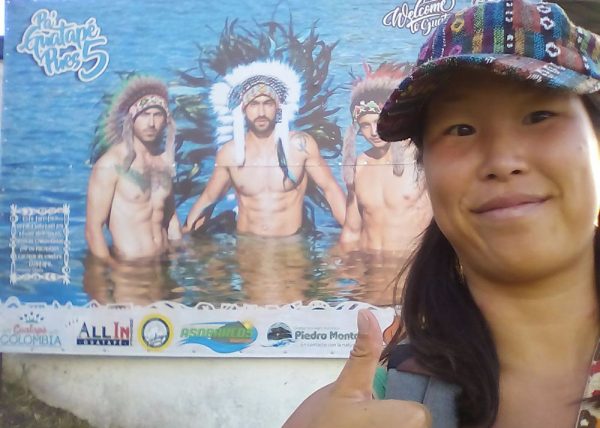 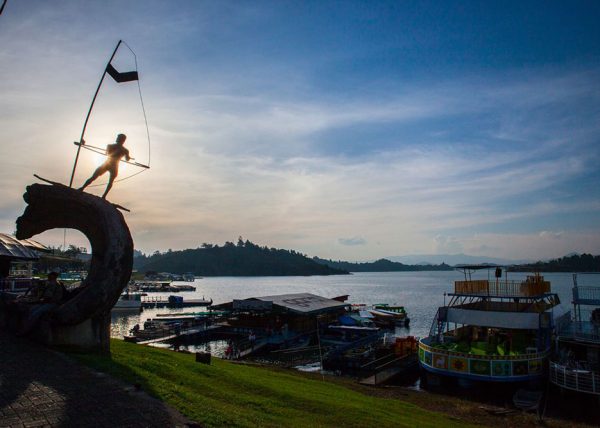 Today I went to Guatapé with Chieko. I met her in Sucre and seen her in Huacachina again and now again here!

I was supposed to go with some people here at the hostel, but to be able to enjoy Guatapé I wanted to leave earlier then they did, so I was really happy to hear from Chieko this morning!

Showered, had breakfast and walked for 25 minutes to the metro. At the stopover metro station I met up with Chieko! So nice to see her again!!!  There we took a bus to Guatapé, it took about 1,5 hours.

When we arrived on top we met this guy Moe. He had a drone and was just about to put it up in the air. So awesome! We stayed to watch and talked a bit with him. Then his 2 friends Danii and Lorena came up to us and we had a chat and they immediately asked if we wanted a beer! Colombian hospitality I guess. So nice!!!

We stayed and talked more and got on a picture and video too with the drone. We still have to receive those, but they are awesome!!! Then we went up the look out point and enjoyed the view there.

Then we walked for 1,5 hours to Guatapé and had amazing views! Such beautiful nature!
There was this one point where we could cross the road on a sketchy bridge. I didn't really trust it, but we dit went up to check it out. When we were up there I saw a guy walking underneath and asked in my perfect Spanish ;P if we could cross it, but he nodded no. And if he already nodded no, it's probably a good no... Good that we asked haha

The town itself is one of the most colourful towns in South America! Really cute!

We were very hungry, so first lunch! Chieko had an umbrella to protect herself from the sun, and when we wanted to look on a menu at a restaurant, she didn't have one hand free to hold the umbrella. Without asking the waiter took it and held it up for her while looking on the menu! hahaha

While having lunch we saw Moe, Danii and Lorena again. And guess what... They had my cap!!!! I was so happy!!! They figured that they would see us again in the town :P

Then we walked around in the town and wanted to watch the sunset there, but that failed. We had a bus ticket back for 19:00 p.m. and couldn't make it from the viewpoint. So we just sat on the grass at the lake near the bus terminal. Together with the 2 dogs being romantic and all with the flowers on the grass hihi

It was a great day and it was really nice to see Chieko again and meet those people!

Tomorrow night I take the night bus to Santa Marta at the Caribbean coast! Can't wait!